It is not known to evolve into or from any other Pokémon.

Tentaquil is a kind of blue frog/toad of some sort. It has a golden spiral on its belly, and long claws. Tentaquil's stomach suffers from such a strong gastritis that it has the power to puke blood with a pressure of 997,999,993 psi holy shit.

Tentaquil can rarely be seen in the wild.

Do you really not know what Tentaquil is based off of? It's a Tentaquil. Show some respect.

Back in 2010, there was a thread on /vp/ to draw your favorite Pokémon without looking. Someone drew this. 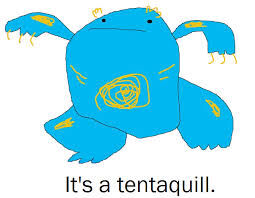 When asked what it was, the creator replied "It's a Tentaquil". A romhack was later made called "Pokémon: Tentaquil Edition", in which the player's only Pokémon is Tentaquil with his signature move "Puke Blood". The creator might've meant Tentacool/Tentacruel/Politoed/Quagsire/Cyndaquil.

Tentaquil soon become a hit meme on /vp/, with its signature move of vomiting blood.

Retrieved from "https://pokeclover.fandom.com/wiki/Tentaquil?oldid=74067"
Community content is available under CC-BY-SA unless otherwise noted.