It evolves from Slughug starting at level 48. It is the final form of Slugbud.

Slugfugg can be found in any body of fresh water, including ponds, lakes, and rivers. 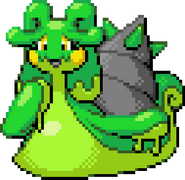 Slugfugg is based on the /vp/ meme of 'Goodra is female only', in that it starts as a 100% female species and becomes a 100% male one upon evolving. The fact that it changes gender upon evolving may also be a reference to the fact that actual snails can change their gender at will. Its shiny form is in reference to Goodra itself.

Slug, and 'fug', previously explained on Heliofug's Page. It likely also derives from "Slugfucker", one of the nicknames of FemaleGoodra, the poster responsible for the "Goodra is female only" shitposts.

Retrieved from "https://pokeclover.fandom.com/wiki/Slugfugg?oldid=66962"
Community content is available under CC-BY-SA unless otherwise noted.