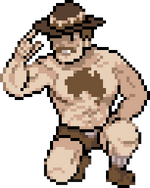 Saxton Hale is a character in the lore of the game Team Fortress 2. He is the owner of Mann Co., which is the company that supplies weapons and such to the two teams. He is most known for his presence in the comics, but he has also made appearances in-game via menus, as well as an official voice and model with the recent Jungle Inferno update.

Retrieved from "https://pokeclover.fandom.com/wiki/Saxton_Hale?oldid=73770"
Community content is available under CC-BY-SA unless otherwise noted.