Rainglock can be found in any body of fresh water, including ponds, lakes, and rivers. 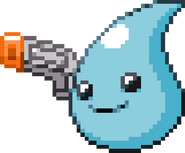 It's a raindrop with a fucking gun.

Rainglock's shiny form is likely meant to represent urine, due to its yellow coloration, and the gun turning gold could be a reference to Goldeneye's Golden Gun.

Retrieved from "https://pokeclover.fandom.com/wiki/Rainglock?oldid=75349"
Community content is available under CC-BY-SA unless otherwise noted.