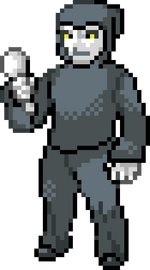 Ginosaji is based on and named after the Ginosaji, a character from the video "The Horribly Slow Murderer with the Extremely Inefficient Weapon", about a man who is chased by the Ginosaji who slowly wants to kill him with a spoon.

Retrieved from "https://pokeclover.fandom.com/wiki/Ginosaji?oldid=70187"
Community content is available under CC-BY-SA unless otherwise noted.