It is not known to evolve into or from any other Pokémon.

It is part of what is known as the Holy Quadfecta of /vp/ Fakemon, with Sadfish, Oreon, and Farfigtron.

Deloris can rarely be seen in the wild. 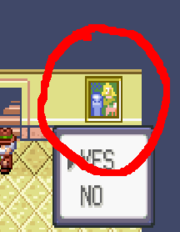 Deloris is a Fakémon based on the odd paintings found in the Lilycove Gallery in Pokemon Ruby/Sapphire and Emerald. The painting features an odd looking shape that was interpreted as a 3 legged horse like creature with a face resembling Bellsprout and Jynx.

Deloris is a variant of the name Dolores, which literally means "sorrowful", explaining its signature move, Fizzbitch.

Retrieved from "https://pokeclover.fandom.com/wiki/Deloris?oldid=68921"
Community content is available under CC-BY-SA unless otherwise noted.